We have arrived at the end of the Escape From Goblin Town scenarios!  It has been a fun journey thus far and the last scenario presents its fair share of new wrinkles.  Perhaps most significantly for me, it gives me a chance to use my favorite Hobbit mini that I’ve painted!  After the last battle report, I took extra time and care to make sure that I got all of the rules down and I think I avoided any major mistakes this time (much to my relief!). 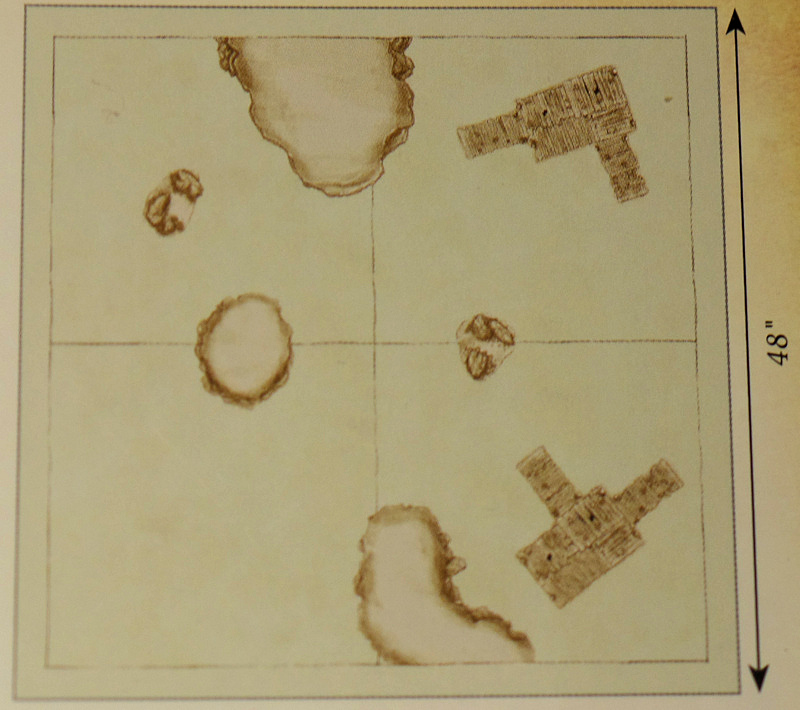 Pre-Game Thoughts – The conceit for this scenario is that Gandalf and Radagast team up in the Misty Mountains to look for signs of the Necromancer there.  Not the most convincing or thematic idea but this scenario has the feel of a “bonus” scenario through and through.  My main thought/concern was whether this would be very balanced or not.  Twenty goblins on the board at the start with a possibility of a huge number of reinforcements turning up didn’t sound good.  When you throw in that the Goblin King can appear as well, you’ve got trouble!  Having used Gandalf and Bilbo in the previous scenario, I knew how limited in combat Gandalf can be with his single attack.  Radagast also has one attack so I didn’t think I would be getting a huge upgrade from Bilbo there.  I also don’t have any rocky terrain so I just omitted it from the scenario.  I’m not really sure how much of a difference it would have made in this case besides making the board look nicer.

The main reason I don’t think terrain is all that essential is that the goblins can deploy half of their number anywhere that is six inches or more away from the wizards.  With the Sentry rule in effect, there is no reason for the evil side not to crowd the wizards and try to raise the alarm as soon as possible.  This obviously prevents the use of terrain by the wizards and is exactly how the evil side deployed as you can see in the image above.  The goblins hoped to raise the alarm as quickly as possible and then swarm the wizards.

The good side has a lot more strategic options in that they have to try and be sneaky but also use their spells to try and manipulate the board in a way that allows them to get to the platforms and find signs of the Necromancer.  With one attack, neither wizard can afford to get bogged down against many goblins and neither one wants to take on the Goblin King should he turn up.  I figured that Sorcerous Blast would really help level the playing field for the wizards and hopefully rack up enough kills to get a break test.

Battle Report – Starting with priority and the distinct feeling of being penned in, Gandalf and Radagast walked forward amidst the goblins preparing to split up as needed and hoping to avoid the goblin’s alarm for as long as they could. Using their “free” point of might, both wizards casted Terrifying Aura, in the event that they needed it later on. The sentry rule in this scenario requires that each goblin take a courage test to determine who gets to move them and then they move D6 at the good or evil side’s discretion.  Most goblins failed their courage test and moved away but one goblin charged Radagast and another moved within three inches of Gandalf which could also raise the alarm at the end of the turn. Desperate to kill the goblin in front of him quietly, Radagast burned a might to tie and win the duel and after failing to kill the goblin with his staff, the plucky Sebastian fatally bit the goblin! Any joy the wizards felt was cut short, as the screams of the goblin caused the alarm to be raised. Eight goblins appeared behind the wizards who quickly realized how dangerous the caves in the Misty Mountains can be! 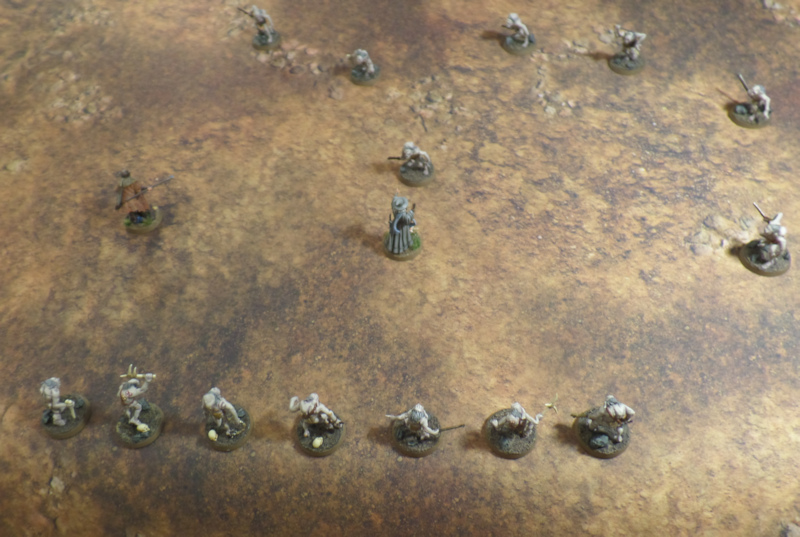 In a crucial priority roll, the goblins won priority on a tie and would try their best to surround and maul the wizards… Gandalf was charged by three goblins and would not be able to cast any magic this turn. Radagast ran forward and charged into a goblin who stood in the way. The goblins not only won the combat against Gandalf but each one managed to stab or bite the old wizard! Gandalf used all of his Fate points to prevent two of the wounds. The wizards’ luck was looking very poor indeed. 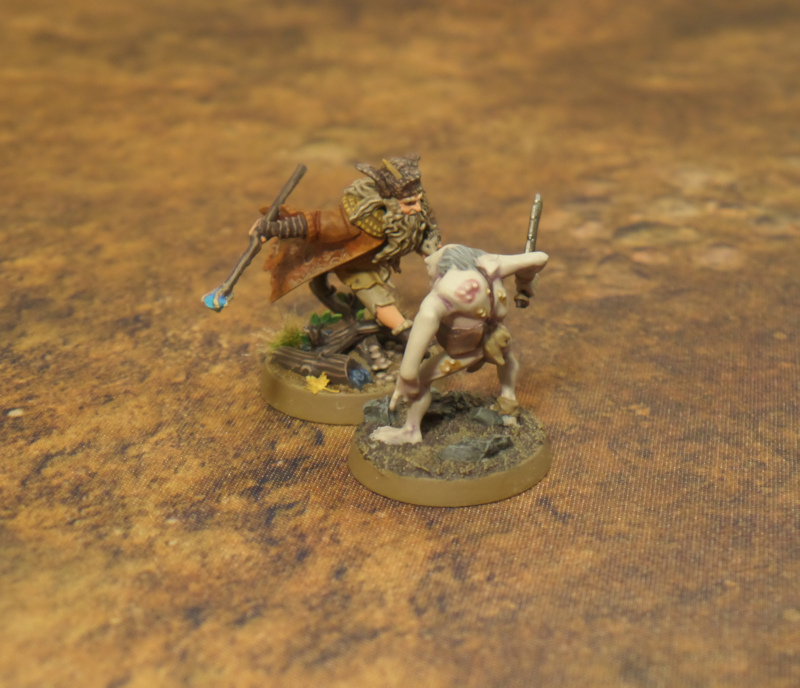 Radagast fortunately fared better and delivered a fatal blow to the head of the goblin with his staff. Sensing that more goblins behind the wizards was no longer the best option, the nine more goblins entered the board edge along the far side. Surprisingly, at the end of the second turn, I was quickly running out of goblin models to use in this scenario!

The good side won a much needed priority roll. Sensing that a sorcerous blast may help clear some space, Gandalf blasted the goblins who wounded him and he managed to kill the primary target and knocking the other three goblins prone but otherwise unharmed. Gandalf ran as fast as he could away from the goblins to the south of him. One goblin charged Gandalf this turn and was promptly dispatched by the wizard. Gandalf’s position remained precarious and losing priority next turn would be very bad. With a roll of ten for reinforcements, I ran out of goblin models this turn when ten were supposed to enter the board.  And that was even after pressing Grinnah and the goblin captain into service!

The goblins won priority and hoped to pass some combat tests and bog down Gandalf! Three goblins had the pluck to charge Gandalf as the rest cowered in fear or gathered around him. Radagast cast immobilize on a goblin in his path with the hopes of quickly subduing it.

With a sigh of relief, Gandalf won the duel with a six but failed to kill any goblins. Radagast lost his duel but faced no reprisal due to Immobilize. Rolling double ones for reinforcements, the wizards’ luck got even worse, as the Goblin King heard his minions’ pleas for help! Since the King needs minions nearby to hurl and Gandalf still struggled to break away to the other side of the board, the Goblin King chose the West board edge for his arrival.

The goblins kept priority which forced Gandalf to call a heroic charge to avoid becoming trapped. Each of the three goblins that could charge the eccentric Radagast were too scared to do so. To Gandalf’s delight, none of the goblins could get past their fears and actually charge him as well. 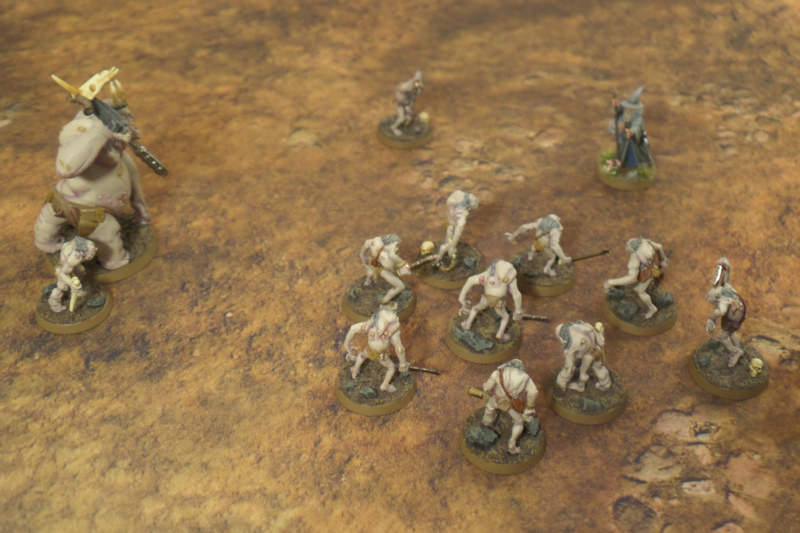 Using his freedom, he cast sorcerous blast using two Will to target the goblins on the far edge who might prevent moving next turn. Radagast used the same trick as last turn with immobilize and charging a goblin. The Goblin King hurled the nearby goblin and surprisingly hit Gandalf. Neither the goblin nor Gandalf suffered a wound though (It wasn’t until next turn that I realized that I used the less effective Hurl instead of Goblin Projectile.  I didn’t make that mistake again thankfully!). Radagast’s trick once again failed when he lost the duel. I skipped rolling for more goblin reinforcements, as I had no models left to add and figured they wouldn’t impact this scenario at this point either.

The goblins kept priority yet again causing Gandalf to call for a heroic move to keep away from the Goblin King. One goblin charged Gandalf and two overcame their qualms and charged Radagast.

The Goblin King tried to turn a nearby goblin into a projectile but failed to hit Gandalf. The old wizard managed to cleave a goblin with Glamdring but Radagast lost against the two goblins and had to use a point of Fate to prevent a wound. Each of the dead goblins returned on the North side of the board.  With six dead goblins, the wizards needed to somehow get the magic break test number of 11 to survive this one as they were seriously outnumbered.

Much to their relief, the good side won priority. Gandalf and the Goblin King called a heroic move. Gandalf won the roll off which made using his last point of might worth it. Gandalf failed to cast sorcerous blast by a single point and then charged a goblin near Radagast. Radagast charged a goblin nearby to help keep Gandalf safe and hopefully cause the goblins some casualties. An additional goblin charged each wizard and suddenly things looked dire again. The Goblin King failed to hit Gandalf with another launched minion. The wizards’ poor luck finally ran out when Gandalf promptly lost the combat and slumped to the ground as a result of the goblins’ frantic attacks!

Post-Game Thoughts – This might be the first time in my battle reports where the good side’s poor rolls directly impacted how well they fared.  The wizards could not get priority which kept Gandalf slowed down by the goblins.  Having the Goblin King make an appearance only made things even more dire.  Truth be told, I made one tactical mistake which is not having Gandalf move at least one sentry away from the wizards with Compel on the first turn.  That might have given the wizards a chance to avoid the alarm on any other day when their dice rolls were better.  Ultimately, the evil side was just too much for them to overcome and while the game was competitive, it was a solid victory for the evil side.

As far as my thoughts on the scenario itself.  It is good and it is fun but it is not without some faults.  First of all, there is a lot of rolling for sentries which would not be fun if you had to do it for several turns.  Every goblin requires two rolls in the movement phase.  I also think either adjusting the deployment zone back would be a good idea (maybe 12″, instead of 6″?) or trying out sentry rules from the One Ring rulebook like suggested on the Green Dragon Podcast.  This would make the game a bit more cat and mouse instead of cats surrounding the mouse!

While the scenario does a great job of continuing to teach you magic, I think that the poor combat abilities and the “grind” of having to kill so many goblins to break them is also something that could be a bit better.  Gandalf and Radagast just aren’t great at winning combats or killing goblins and even sorcerous blast makes it take a while to even have hope that you’ll break the goblins.  That is perhaps a larger issue with the Escape From Goblin Town Box set as several scenarios turn into major combat grinds but don’t let these criticisms make it sound like this scenario isn’t fun or worth playing.  I definitely had a good time and I felt like the evil side won “fairly” which made the conclusion feel satisfying.

2 thoughts on “Wizards in the Dark – Hobbit SBG Battle Report”