This week will be light on WIP and heavier on hobby musings.  I will do my best to make it as entertaining and insightful as I can.  Hopefully my discussion on the importance of storage space in our hobby is something that will resonate with all of you as well.

While I’ve been hard at work on some really good stuff, neither have been weathered yet so instead of showing you those in an unfinished state, I’ll hang onto them until they’re done next week.  Fortunately, I have something I carried over from last week that I think is worthy of showing off all on its own. 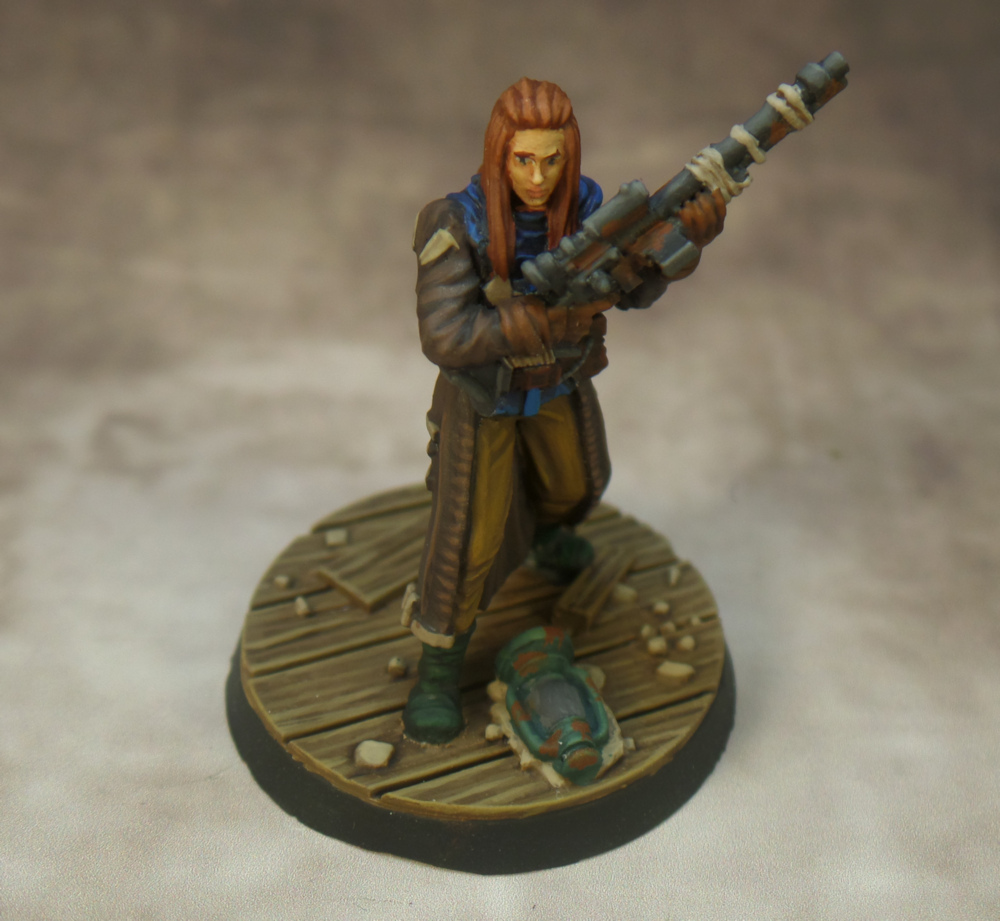 This settler came out better than the first even if there were parts of the mini that were truly difficult to reach with the paint brush.  That is something I’m noticing is a bit challenging and frustrating with Fallout minis.  They don’t always seem to be designed with the painter in mind in that regard.  Not to blow my own horn but there is a lot that I am proud of with this mini.  Her face and the front and sides of her hair came out well.  The lamp and the wood planks on her base are also as good as anything I’ve painted recently.  The subtle wear on her jacket was sculpted but looks quite nice on the mini as well.  While the back of the hair didn’t quite come out as nicely, that is about the only thing I can think of to improve on her.  All in all, this is as good of a mini as I’ve painted in a little while and it is always nice to have something like that to share in the weekly round-up!

And now it is time for some hobby musings.  You know what one of the greatest challenges of this hobby can be, particularly for any of us who dwell in the city?  Storage space!  To give you a little background about myself.  I live in Chicago in a small two bedroom apartment.  That is bigger than some people have in this city (and in other cities for that matter) but it is smaller than the space I had when I lived in Cincinnati for the good majority of my life.  When I moved here, I brought as much of what I could with me but also got rid of quite a bit of stuff to try and adjust to the smaller space.  I am a man of many hobbies (for better and worse) and I admit that I am using up some of the storage for other hobbies.  For example, I have some Nintendo action figures I bought before taking up this hobby that I have no intentions of parting with.  I also have a fairly large video game collection (which isn’t taking up valuable storage room in my closet anyway) and I collect Star Wars and Marvel trading cards which take up some room but not enormous amounts either.  I probably own less stuff overall than many of you who read this site and I’m prepared to get rid of several things to clear out a little bit of space including my Mansions of Madness Second Edition board game and my Nintendo Nendoroid figures(which have remained in their boxes because I have no place to display them).  All this is to say, I’m doing the very best I can to maximize my storage space and I realized this week that I truly am running out of room even after I get rid of a few things.

You would think that this would have hit me much sooner but it really just did this week as I was looking for house terrain for Fallout so I can begin playing in the near future.  I’ve also been looking forward to making hobbit holes and I’m realizing that I don’t have the space to store more than maybe one or two of those or some houses for Fallout.  So this means that I need to decide very carefully what larger terrain I buy because I don’t have room for much more.

This is definitely a downer in the short term but my fiancee and I have been discussing buying a place in Chicago at some point in the near future (if Coronavirus didn’t happen, we might be looking seriously for a place right now as a matter of fact) and when we do buy, the place should be a 3 bedroom at minimum and I’m expecting to have more storage at that point.  I expect that as long as I live in the city, I will have to be cognizant of space before I tackle projects because this isn’t like living in the suburbs in the Midwest where middle class families live in houses with 4-5 bedrooms and there are large basements for storage too.  Truthfully, I haven’t decided how to spend my terrain space yet but I’m going to try to figure out what is going to give me the best gaming buck for my money as it is likely to be another year or at least six months before we move into a bigger place as my lease is coming up for renewal soon.  I also wanted to share all this with you because I imagine that it will impact what I do in my hobby in the near future.  It won’t limit me painting miniatures much as I have a decent amount of storage for minis available but it may mean I end up focusing more on Fallout or MESBG and have to shelf terrain for the other game as I won’t have any space for it.  I may have to re-prioritize my projects and go back to some of the Hobbit scenarios where I’ve got most of the terrain I need to play as well.  I’ll keep you updated on what ends up happening and I encourage you all to avoid my mistake.  Don’t build or commit to any projects until you’re sure you have the space or you may run into roadblocks like me!

15 thoughts on “A Settler Emerges and so does Storage Issues…”