This week’s scenario presents something very different.  Instead of platforms limiting movement, there was an open board to play on.  Knowing that my kitchen table wouldn’t realistically pass for the caves in the Misty Mountains, I decided to order a F.A.T. Mat that fits the Goblin Town aesthetics pretty well.  So I’m certainly excited to show it off.  I can also tell you that this report will be a lot shorter than the previous one though you’ll have to read on to find out more! 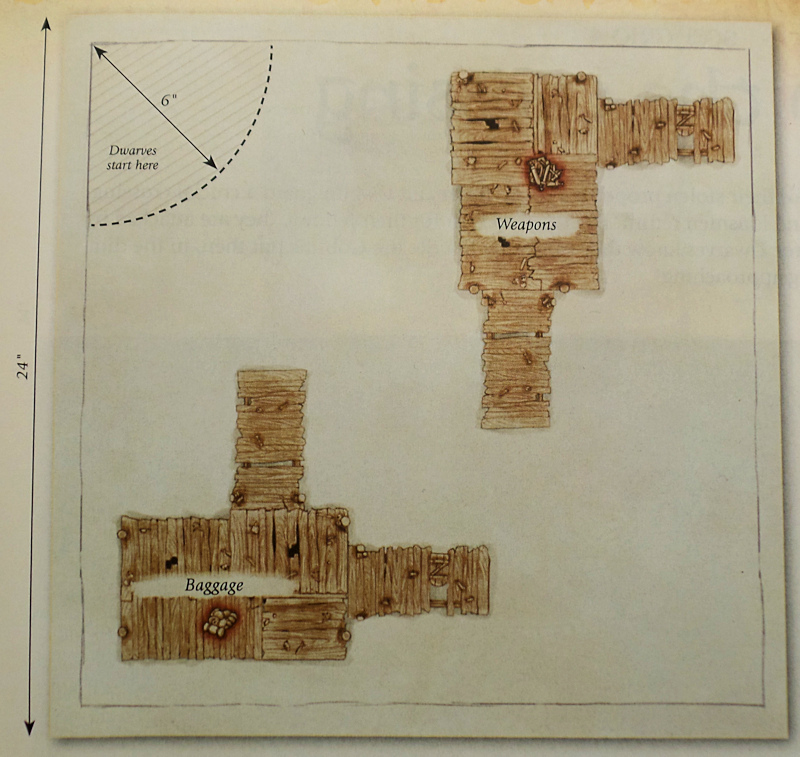 Pre-Game Thoughts – This scenario is the first one I’ve come across thus far which is a bit harder to play solo from a logistics/rules perspective.  There are two objectives and the evil player hides which one is needed to win from the dwarves.  Since I will be playing both sides, I will just roll a die and there is a 50% chance it is the one right.  That may result in an advantage for Thorin’s Company in some games but that seems the easiest way to handle it. 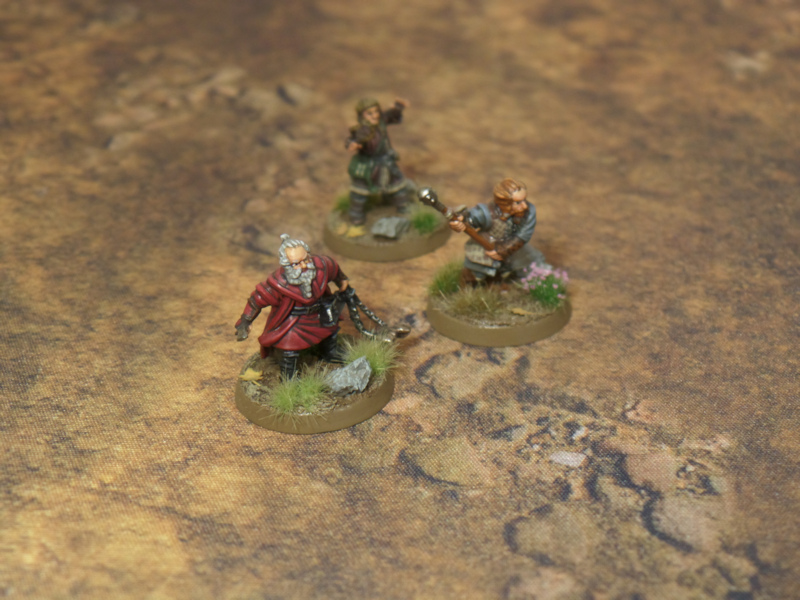 With three new dwarves to try out, my main strategy was to try and leverage the power of Dori and Nori while keeping Ori safe.  I didn’t have too much strategy beyond that since it is a fairly open board.  The evil side has a chance to swarm the dwarves fairly quickly in this scenario and I could see no reason why they wouldn’t to slow them down as soon as they could.  The Goblin Scribe is a new toy for the evil side and it is very effective at bringing back goblins.  The fact that the goblins can come in from any board edge is a big deal as well.  All in all, this should be a challenge for Thorin’s Company. 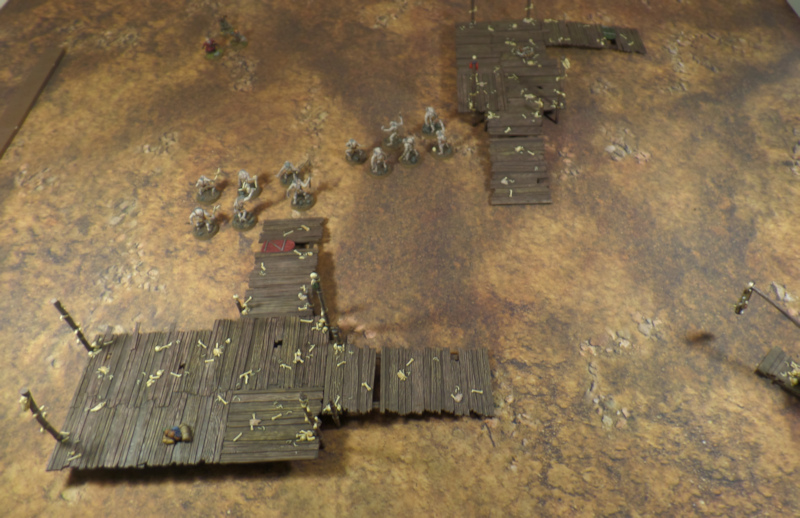 Battle Report – Dori and Nori cautiously move up to let Ori fire a couple of shots with his slingshot. The goblins responded by surging forward to limit the onslaught of pebbles. Two stones hit their target but were shrugged off by the diminutive goblins.

After winning priority, the left side of the goblin advance surged forward into combat with Dori and fortunately for the dwarves, the right side could not quite charge Nori so he joined the scrap on the left side to try and help his brother. Ori fired his slingshot again and had the same results as the previous turn. The dwarves rolled a six to win their first combat and a single goblin fell to Dori’s whirling flail. The goblin scribe failed to summon any goblins to the battlefield this turn. 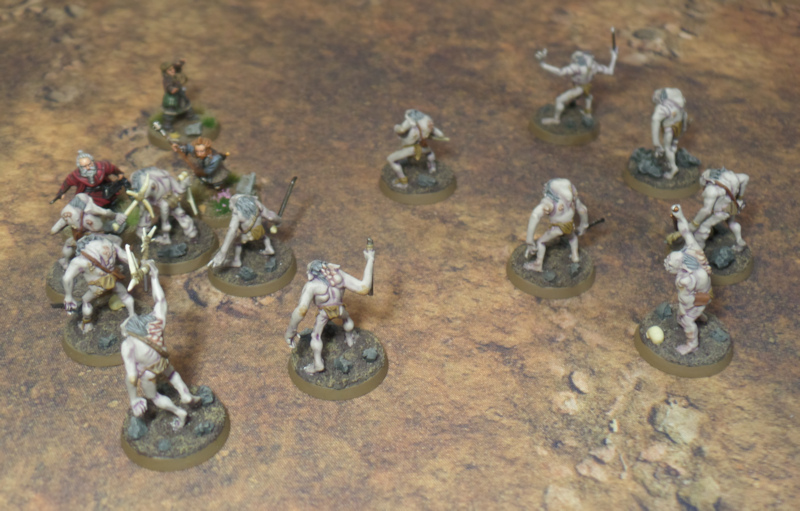 The dwarves won priority and tried to form a defensive line to protect Ori. The goblins piled in and it already looked dangerous for Thorin’s Company. Dori yelled out a heroic challenge in the hopes he could slay his two goblins and support Nori against the four baring down on him. Unfortunately, Dori won the tied duel roll but could not harm a single goblin.  Nori won against the odds but also failed to wound in his combat.  Ori decided to show the others how it is done and slayed the goblin facing him. The scribe was once again unable to call any reinforcements.

With goblins winning priority, they once again charged and hoped to fare better while the dwarves desperately needed to thin a few goblins down before someone was injured or killed. Ori lost his duel with the goblins and luckily avoided being wounded in the fray. Dori won his combat and killed a goblin. Nori won his combat by rolling double 6’s and also killed a single goblin. After the goblin scribes pleas, two goblin reinforcements showed up this turn and joined on the board edge, near dwarves. 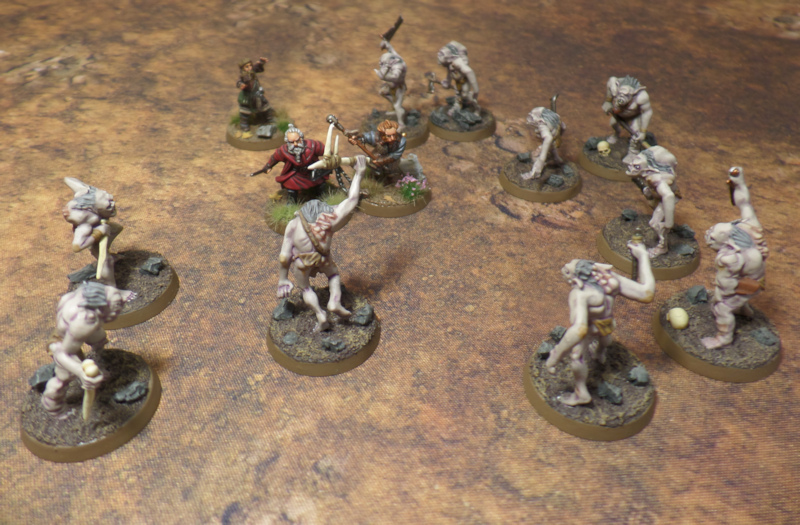 The dwarves won priority and sensed that they needed to start pushing forward and getting away from the board edge more where possible. So gathering their courage they charged straight into the goblins.  This risky strategy might allow Dori to be trapped should he lose his combat, however… 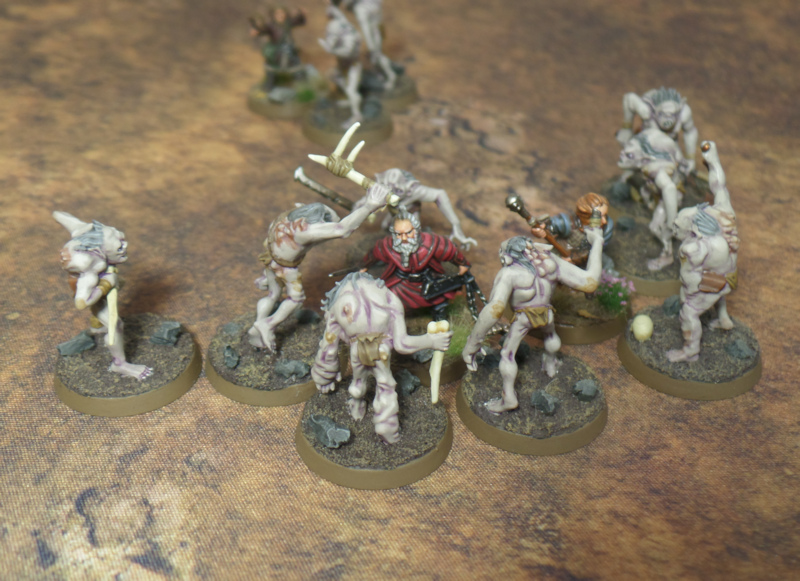 Proving to be surprisingly effective in battle despite has modest stats, Ori once again beat back two goblins and killed one for his trouble. Nori needed a 6 to tie the goblins he was facing and promptly rolled one! He only mortally wounded a single goblin though. Disaster struck when Dori lost his combat and then promptly suffered three wounds to the goblins. Not even a point of fate would keep him alive.  The goblins let out a cheer as four more of their kin joined the battle thanks to the Goblin Scribe.

The dwarves were going to inevitably lose now and so this game belonged to the Evil side.  It was the goblins’ second victory in a row and Thorin’s Company was getting pretty roughed up in Goblin Town!

Post-Game Thoughts – Ouch.  That was short and poorly played!  I made a lot of mistakes with Thorin’s Company but the most costly was not moving the dwarves away from the board edges in the opening turn or two.  Ori’s slingshot is honestly pretty terrible and while I might have killed another goblin or two with it, that was not a good reason for not charging ahead in combat and getting to a safer place.  Moving Dori into a huge fight with goblins was a massive gamble but guaranteed an early loss once he fell.  Is this scenario as tough as the last one?  I can’t tell yet because I think I played it so poorly that I didn’t put it through its paces.  The weekend is far from over so I wouldn’t be surprised if you see a second attempt for this scenario sooner than later!  I don’t know if I will always write up scenarios where things go so poorly, so quickly but I thought it was worth sharing this one to encourage new players to try these scenarios a couple of times to make sure it isn’t just bad luck or bad strategy when you’re playing.