Another week, another battle report!  It is kind of cliche for me to say this at this point but I was once again excited to play out this scenario and I was somewhat confident that it would be more fun the previous one.  What makes Guard the Crossing exciting is that it is a bit of a role reversal for the dwarves.  Instead of having to break through or get to something, they’re defending this time!  When you throw in some new rules and the Goblin King, you’ve got a scenario that at least on paper looks like a winner. 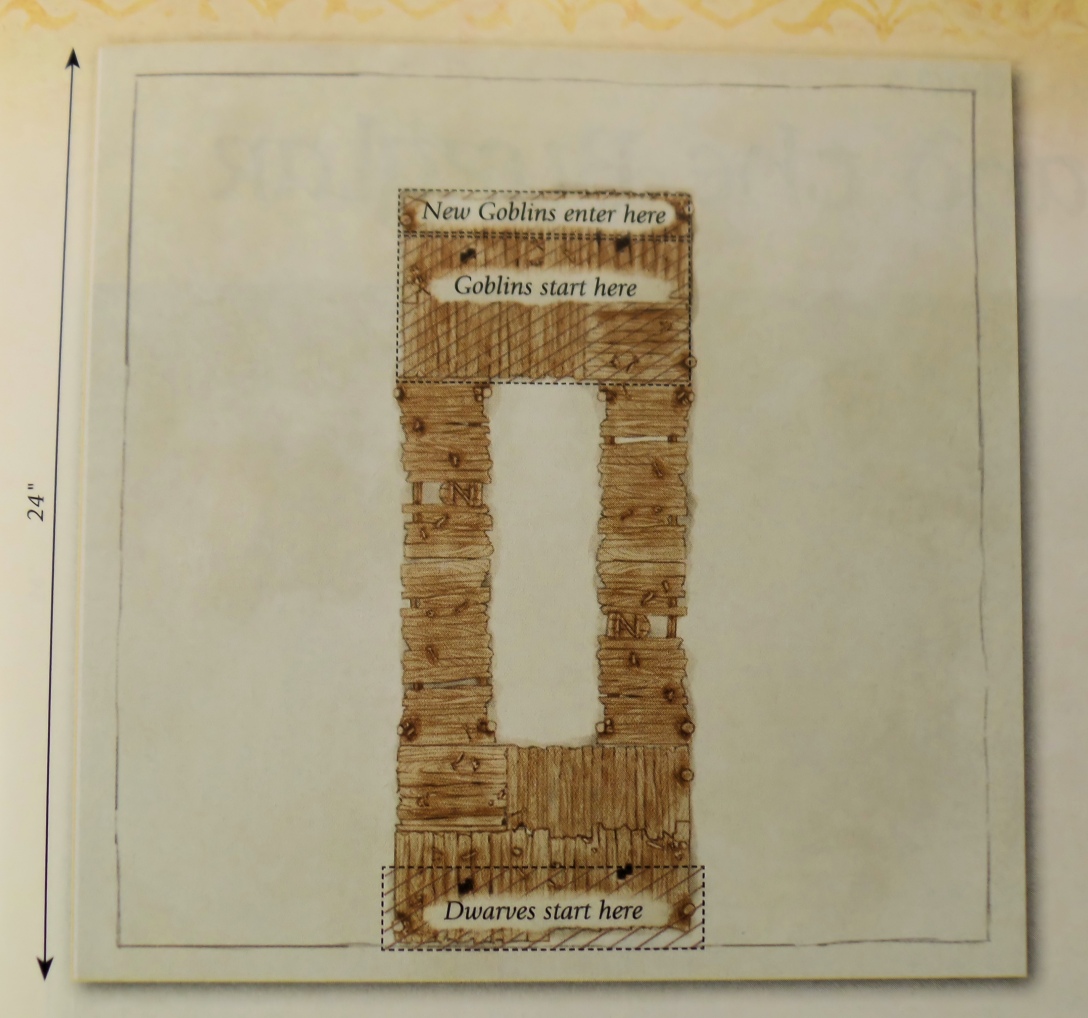 Pre-Game Thoughts – As you would expect the layout is fairly simple but makes use of the terrain in the Escape From Goblin Town set.  With three dwarves, you obviously have to split them up so Thorin’s Company left Thorin on his own and Dwalin and Balin on the other side.  Balin is useful to have around with his ability to help you re-roll priority but is fragile and hardly the combat monsters that Dwalin and Thorin are.  Both have incredibly strong defense and are not going to be easy for the goblins to wound, let alone kill.  The strategy here is simple, hold up the goblins on the walkways as much as possible with the three dwarves.

The evil side benefits from The Swarm rule which means a ton of goblins will show up in this scenario most likely.  If the evil side is lucky, the Goblin King arrives on the roll of a one so an early one will present some really difficulties for the dwarves here.  Outside of picking on Balin, there is little the goblins can do but try and swarm the dwarves and hope for some good rolls until the Goblin King shows up.

Battle Report – In the opening turn, the dwarves and goblins surged forward eager for combat which would begin next turn.  The Swarm roll was two much to the relief of Thorin’s Company!

The good side won priority and charged into the goblins to keep some walkway space behind them in case they needed to retreat a bit later on. The goblins piled in as usual to take advantage of the Chittering Hordes rule. Thorin tied the goblins which he won due to his much superior fight value and pushed the four goblins bearing down on him but failed to kill any. Balin lost his combat but fortunately did not suffer any wounds. Dwalin rolled a four which was just good enough to win his combat and showing the other dwarves how it is done, he scored three wounds and killed both goblins. The crucial Swarm roll was a six much to the goblins’ delight.

The goblins won priority and decided to stick to their plan of trying to kill Balin. Two goblins charged the old dwarf and two others sprang for Dwalin. Thorin once again faced down four frenzied goblins. Dwalin lost his duel roll by one to the goblins and decided to burn a point of might to cause a tie and win the fight. Dwalin once again wounded and killed both goblins he faced. Balin won his duel again and sliced up the goblin near him. Thorin won his duel again (barely) and slayed two goblins.  Doing miserably thus far in combat, the goblins looked for their leader to come and save them from the formidable dwarves but rolled a five for The Swarm instead. There was a goblin horde on the platform but they couldn’t win combats and were losing ground to the dwarves.

Thorin’s Company won the priority after another tied priority roll. Deciding to continue to push forward in the event the Goblin King turned up, the dwarves charged into the nearest goblins. Balin won and stabbed the nearest goblin to death. Dwalin lost his combat but his defense 6 prevented any wounds. Thorin also lost but the goblins were unable to harm him. Six goblins climbed up the platform and joined the battle only to find a really crowded walkway in front of them.

Seizing the priority, the goblins reclaimed the small amount of territory that they gained last turn and had no choice but to continue fighting the dwarves in the same manner as the last couple of turns. And just as things seemed to be going a bit predictably, Balin lost his duel to the two goblins and was viciously stabbed! Two fate points could not prevent any damage and the old dwarf succumbed to his wounds much to the goblins’ delight. In his rage, Dwalin slaughtered the two nearest goblins and prepared to fight off as many as he could on the right walkway. Thorin managed to win another round of combat and put a goblin out of their misery too. Much to the relief of Thorin’s Company, two goblins arrived to the battle and the Goblin King continued to shy away from his minions.

Things were tense at the halfway mark of this game. Two formidable dwarves prevented the goblin swarm from advancing but could they do so for another five turns? When would the Goblin King finally show up and potentially turn the tide in favor of the goblins? In the turn’s first combat, Dwalin lost against the four goblins facing him down and he burned all of his fate points to prevent any wounds. Thorin sensed his leadership was needed and with a mighty swing of the sword killed both goblins in front of him. Six goblins entered the fray as their allies were still being stymied by two brave dwarves.

The goblins snatched priority and hoped they could find a way to rid themselves of Dwalin and surge across the crossing. They had no such luck however as Dwalin swept the two goblins nearest to him off the walkway and to their deaths. Thorin lost his combat by a single point and decided to use his first point of might to keep the pressure on the goblins. Much like last turn, he was able to once again carve up the two nearest goblins. With the arrival of two more goblins at the end turn 7, the Goblin King’s arrival looked more and more unlikely.

With victory looking all but assured, the question changed from would the dwarves win to could they prevent any of the goblins from escaping the board? Dwalin had no issues with fatigue as he fatally slammed the three closest goblins. Thorin tied and won the duel against four goblins yet again but only killed a single one this turn.  Much like previous turns, the Goblin King chose yet again to steer clear of this scrum.

The good side grabbed priority and confidently advanced again into the goblins. They were guaranteed a victory and ready to see how much more they could embarrass the goblins! Dwalin’s overconfidence caused him to be outdueled but he barely escaped grievous harm when the goblins rolled two 5’s! Thorin miserably lost as well but the goblins were not strong enough to harm him. Three goblins turned up to see they were now stuck in an incredibly long line.

With the goblins having priority they advanced hoping to gain a little bit of honor and possibly kill a dwarf. Dwalin lost his fight once again and suffered his first wound. Thorin lost his duel but the goblins were unable to harm The King Under The Mountain. With three goblins entering the battlefield, the dwarves claimed a convincing victory and snapped their losing streak!

Post-Game Thoughts – This scenario lived up to my expectations even if it didn’t go the way I necessarily would have predicted.  Not having the Goblin King show up in 10 turns was statistically unlikely and it meant the dwarves never had to sweat it out as much as I thought they would.  With that said, losing Balin early on did make the middle of the game a bit more tense.  I probably should have let him hang back and not face so many of the goblins early on.  Dwalin and Thorin are absolute beasts and the goblins need to roll sixes to wound them which proved very difficult even with as many as four goblins a turn facing them.

As I played this scenario, I realized that I forgot to use Terror on Orcrist which was actually fine because the dwarves didn’t need any other big advantages.  I also chose to play it so goblins using Chittering Hordes could be killed if there were enough wounds and the goblins would only break if the total number of goblins on the board reached the break test.  These tweaks led to a pretty fun game even if there is a bit of grinding through some combats in the middle of the game.

Of course, if the Goblin King showed up that would have changed this game quite a bit and I would be inclined to add a house rule that starting on turn 6, the evil side can bring him on with a roll of 1 or 2 and then 1, 2, or 3 on the following turn.  I don’t think the dwarves will lose this scenario too often without the Goblin King showing up but I didn’t realize that until the final turns of this game and so I wasn’t upset or overly disappointed that he didn’t show.

My final suggestion would be that if you’re a new player, have at least 20 goblins painted up to make sure you have enough for this scenario.  I had about 30 on the board by the end and while it wasn’t necessary to have them all since most of them sat around, it does add to the flavor of the scenario to see a huge swarm of goblins!