It took a lot longer than I hoped but I finally have what I need to play a new scenario in MESBG.  Unfortunately, I ran into more warping issues with the previously completed version of Maggot’s crop so I ended up pitching it.  Instead, I got some crops from my favorite MDF supplier, Charlie Foxtrot Models, and made two fields.  The first one I rushed a bit and did not make the crop lines as straight as I should have.  I also used flower tufts and clump foliage one the old one so not super exciting.  The second one I slowed down and tried to make it even higher quality.  I got some cabbage and lettuce from a model train company (JTT) and ended up adding some nice looking flowers for color too.  Probably not realistic crops but they’re playable and look nice and that is what I was going for.

I then worked on hedges which you already know about from my previous guide and I was happy to see that the eight I made just about covers what I need.  The only issue I spotted is that some glue on the edges really shows up white.  Its hard to see in the picture above but it annoys me enough that I’m going to try and fix it this weekend.  Here are some more pictures of the better field of the two. 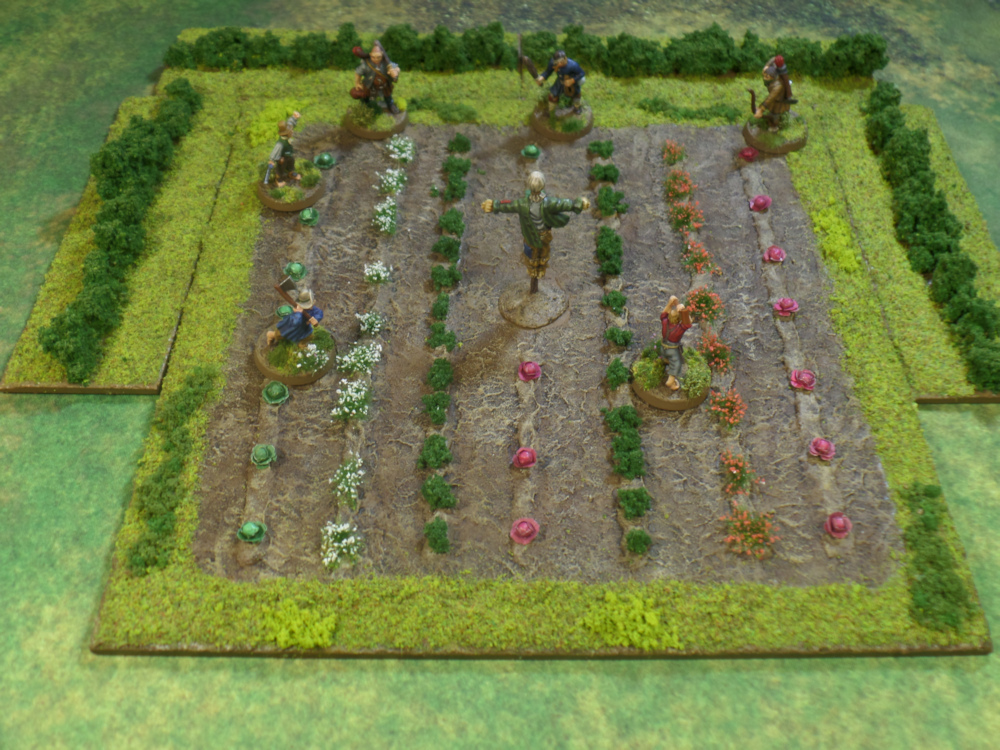 I will try to touch up the terrain quickly because I’m finally ready to get another game of MESBG in!  I’m excited to play the Maggot’s Farm scenario (its one I’ve been eyeing for a long time) and I think it will be pretty fun.  The board will look nice too.  I’m saving a full look at the board until the scenario to give you something to look forward to though you’ve pretty much seen each half of it in separate posts so it won’t be too shocking to see.  I’m also busy reading the new rulebook as well since this will be my first time using those.  I’m very impressed by the production quality and overall polish in the new rules.  I can see why so many people in the community no longer bother with the older versions of the rules.  I might end up doing the same thing myself.

What is less exciting is that GW officially closed indefinitely due to coronavirus.  I was planning on ordering from both GW and Forge World in the near future and now that is completely on hold.  Once I play this next scenario, I have some odds and ends minis I can work on for MESBG but not much and nothing that gets me closer to playing another scenario which is a bummer.  This is another good reason to have a backlog which I have failed to create for a couple of months now.  Lesson learned!  Is the quarantine affecting anyone else’s hobby?  I’m noticing that paint is starting to become harder to buy online here in the US and I fear in a couple of weeks, that people will be struggling to hobby unless they stocked up on what they needed.  These are strange times we’re living in but I’m glad to be saying safe and healthy and productive in terms of hobbying.