It has certainly been another eventful week hobbying for me with the start of some new projects and the continuation of others.  To start off with something new, I painted my first Ruffian.  He needs a coat of varnish to dull down the shine but for the first one of a troop choice, I’m satisfied with the paint job.  This particular mini had a much rougher sculpt that I expected and as I painted, I found a couple of things I had to smooth out which is not ideal.  I made a few painting mistakes on this guy that I’d do over if I could but I don’t care enough to do so since this for gaming purposes.  Hopefully I can improve on future ones as I should have a better idea what to expect.

What is interesting about the sculpt is this guy’s haircut.  While there is a guy I work with who has a similar haircut (and he has gray hair so I painted this guy the same way as a tribute to someone I don’t think I’ve ever spoken with haha) but in general, I’ve never seen anybody with a haircut like this in Chicago (or Ohio before that) so I’d love to know where the sculptor got the inspiration.  I would say it does make him look a bit dodgy and like a ruffian if I may say so myself!  Regardless, I was impressed by the amount of detail on this mini.  There is a lot going on for a basic troop choice.  Compare this to say a warrior of Gondor or a Uruk-Hai and I think you have to spend more time painting a Ruffian because of all of the little details.

I’ve also been working on churning out Goblin Town terrain which is going well, I’ve got at least 1/3 of the box done but it is kind of a bummer to work on as it isn’t fun to show off until you have it done.  One thing I have done is try to change up the color scheme a bit as I think that will make it look more ramshackle than if it is all matching.  At first I didn’t like how the piece on bottom looks but it is growing on me now.  I do look forward to showing off the terrain once most or all of it is done and getting an idea of how much more terrain I might need to paint after this box is finished. 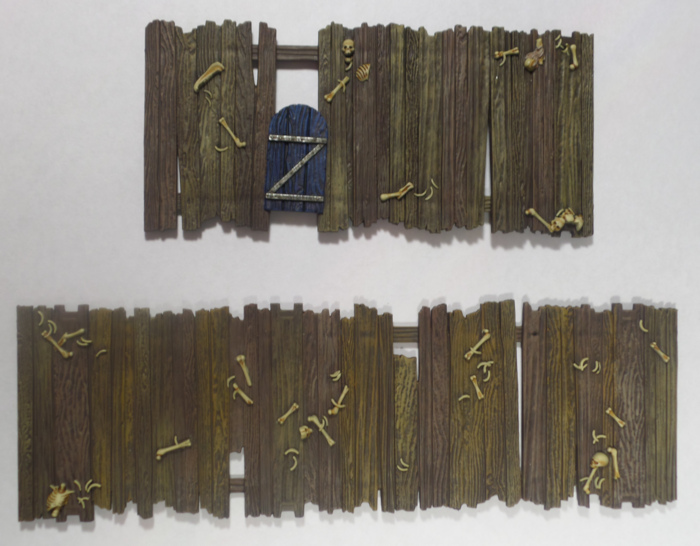 What hasn’t gone so well is me figuring out the limitations of the terrain kit.  I took the top piece pictured above and tried to make it a double story platform like I had done in the past.  It turns out, even though they show that on the terrain’s box images, you can’t do that without breaking the support pieces that you attach on the sides which I promptly did.  It is certainly annoying to paint up something (which is not all that fun to paint to begin with) and then go on to break it!  It also has me questioning how flexible of a terrain kit this is.  Take a look at the recommended setup for the two Goblin Town scenarios below: 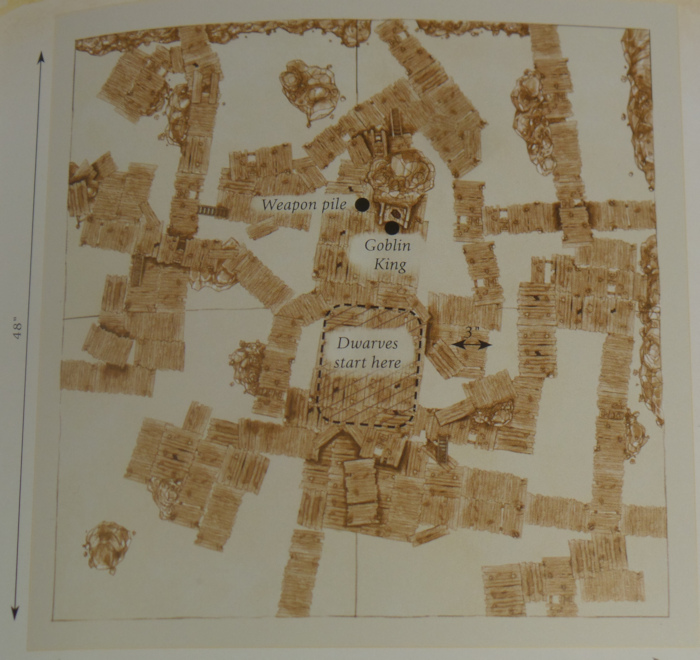 In both of these images, its tough to tell how many levels of terrain are going on and some of the pieces in the drawing quite frankly do not match up with terrain that GW has released.  I guess you could customize some of the existing terrain pieces but with the amount of time it will take to paint all this up as it is, I don’t think many, if anybody will do that.  The other issue is that some of these setups require a ton of a particular kind of piece like the bottom one which requires a lot of long narrow terrain pieces which you only get two in a box of Goblin Town terrain.  I think I’m going to have to try and do the best I can to replicate these setups but not sweat if everything is perfect because it is extremely difficult to match what is shown above.  It is a bit disappointing that GW doesn’t show you a setup that is more easily achievable but I am still looking forward to having the terrain needed for these scenarios all the same.

6 thoughts on “Ruffians and Thoughts on Goblin Town Terrain”