It has certainly been an interesting week hobby-wise.  I have been dragging my feet the last week or two and wasn’t enjoying painting as much as I usually do.  Work and life was slowing me down (and making more tired than I have been in quite some time) but I realized the biggest problem was that I was forcing myself to paint things that I wasn’t especially motivated to work on.  I don’t need Ruffians for the next scenario and while I will eventually, that didn’t mean I had to work on them when I did. 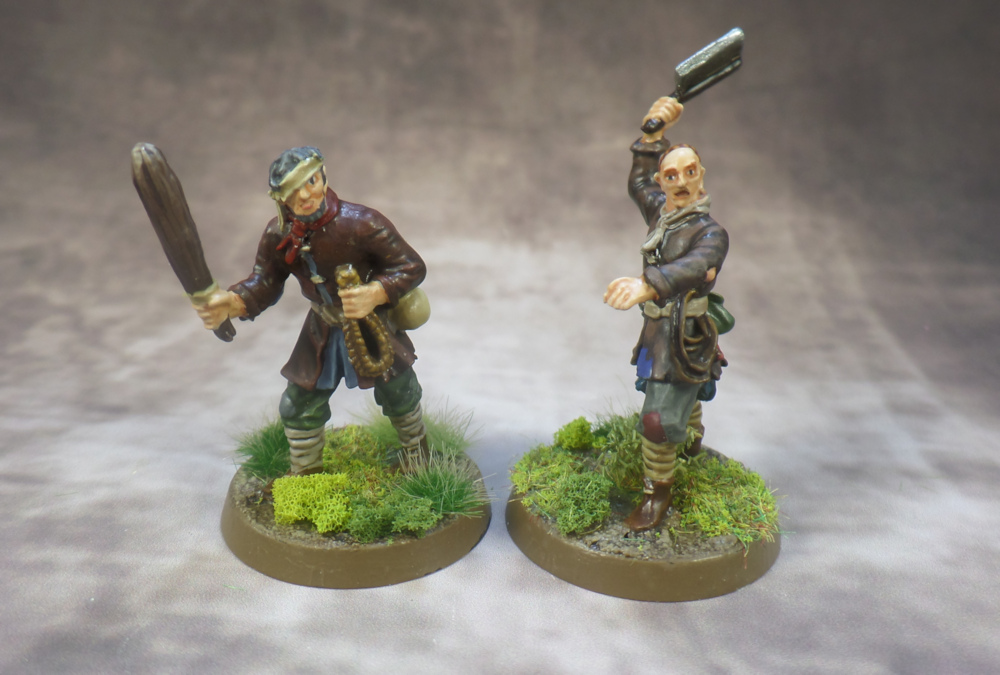 Regardless, paint them I did and I am pretty happy with how they turned out.  I gave myself a little challenge and painted one as a ginger.  I feel like I only like to paint people with blonde, brunette, or gray hair so to have another go to hair color (even if I wouldn’t use it a ton because gingers are somewhat uncommon), it is still nice to have another color in the mix. 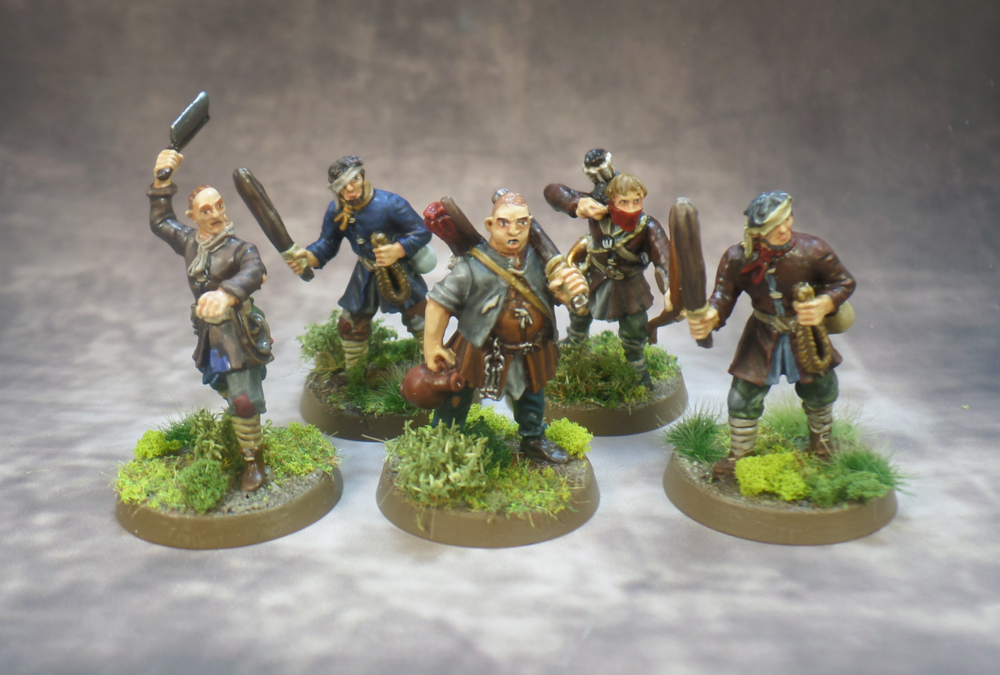 As you can see, those Ruffians were not only painted, varnished, and based.  I actually went ahead and based up all of the recent miniatures I had painted as you can see above.  I got some more flock so I added some light green course turf to some of their bases which I don’t entirely love the look of but I think it is good to have a little extra texture on the base.  I have to admit, this isn’t a bad looking little group (well maybe the Hobbits would find them to be that way)!  I really found these guys to be revitalizing and since working on them mid-week, I’ve been on a real hobby tear.

And then I got to thinking, what does it look like if you get all of my Ruffians together for a group shot?  Here is 9 of them done which is getting pretty close to the maximum amount I can cram into my lightbox for photos so future group shots will probably happen on terrain or something like that.  Having 9 done means that I only need 3 more to get to the magic number of 12 which is what most scenarios require.  That will be a nice accomplishment for the nearish future when I decide I’m ready to get back to painting these guys.

There has been one other thing dragging me down hobby wise that I haven’t discussed yet.  I spent a lot of time recently trying to finish Theoden, only to find that I didn’t have the skill to paint his sword the way that I wanted.  It was really deflating as I know that painting TMM swords is not a strength of mine and edge highlight is also an area where I can improve further but both of these weaknesses have come together and I decided about a week ago that I would stop trying to get Theoden finished.  The details on his sword are so fine and annoying to paint that I cannot do it and keep my sanity.  This means that I will not be entering in the Golden Demon this year after all.  This was pretty deflating because I felt like I was letting myself and others down who have helped and encouraged me along the way.  I know I am a good enough painter to be able to put together a good entry in Golden Demon.  However, I have realized that this mini is not the right entry.  I made a couple mistakes on Theoden that I know the judges would notice and I should pick a more ambitious miniature as well.  I don’t want to “lose” because I didn’t choose as impressive of a mini as someone else.  I’m afraid that would have happened if I moved forward with Theoden.  So, Theoden is going to sit for a while, possibly a long time while I focus on having fun and enjoying my hobbying time.  I really do appreciate all of the encouragement I received along the way and I hope that Golden Demon is a staple at Adepticon for years to come so that I can enter it in the nearish future.

On a more positive note, I’ve got some fairly big things cooking for the Farmer Maggot scenario.  I’m eager to show that I’ve learned from some of my past terrain mistakes as well so hopefully I’ll have some impressive stuff to show off in one week’s time.  While I have failed miserably, my other goal is to get some more sculpts in my backlog so that I don’t run into a situation like I have recently where all I have to paint are hobbits and ruffians and I’m burnt out on painting both types of sculpts.  I will definitely be picking up some new sculpts to help build up my painting backlog so hopefully you’ll be seeing some exciting new models in the coming weeks as well.