For the first week in a while, I wasn’t able to get my usual weekend update done on time but work being a bit of a drag last week was part of that and I was working on some ambitious new stuff including some bigger and hopefully better tree pieces!  I’m pretty happy with both of the tree stands you see below.  A simple continuation of what’s been done before but on a larger and more impressive scale. 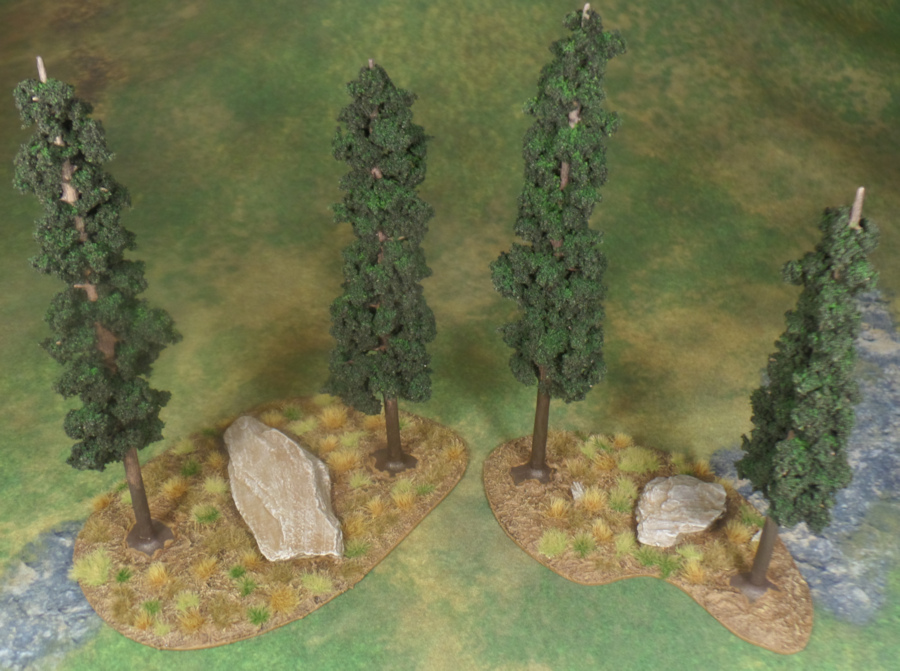 The one issue I am running into and am starting to regret is using pure tufts for ground cover.  These two larger pieces caused me go through a fair amount of tufts and I’m quickly realizing that this is going to get expensive for me as I continue to build terrain.  I’m not too upset about it but I’m learning some lessons that I will apply to future boards for sure.  I think I also need to not use tufts, especially 4mm tall ones, so frequently as minis have some trouble sitting on top of grass that tall comfortably which could make gaming and taking pictures an interesting challenge in the near future.

Speaking of gaming, I got another Hunter Orc on Fell Warg done.  That brings me to five done and seven left to be completed.  Every time I paint one of these guys, I start off on the warg and make great progress and then the orc really slows me down and I get tired of painting it by the end.  I think they look great, especially the last couple I’ve done but it is hard to knock them out very quickly which makes playing these Unexpected Journey scenarios any time in the near future seem difficult.

Speaking of playing, I was thinking about playing Roast Mutton soon as I felt like eight trees and a couple of hills would be enough to give decent coverage on a 4×4 board but I laid it all out while taking pictures and felt that the board was not quite there.  That is a real bummer as it has been forever since I’ve played and to be honest, I need a break from making terrain and from painting Hunter Orcs which means it will be that much longer until I get a game in.  I may bite the bullet and just play on a slightly bare board since I should have time to do so next weekend and I also know that Roast Mutton is a bit of a stinker in terms of game balance.  There are multiple versions of rules for it and I know I’m going to have to houserule it to make it decent so maybe it is okay to play on a board that looks good but not as great as it eventually will?  It will make it that much interesting for all of you to read, right?  Right?  I’m trying to justify it but the perfectionist side of me is also trying to shut it down.  We’ll see which side wins out!

Speaking of perfectionist, I’m starting to think about and obsess over my Shire board which will be what I work on after or alongside the remaining An Unexpected Journey stuff for variety’s sake.  I want to take everything I’m learning and make it perfect or as perfect as possible.  In my mind, it will be like a diorama which tons of detail and character.  Time will probably prohibit that quite a bit and my skills will probably let me down but that is the intention.  I think the only way I can do that is if I build a full-on board instead of a battle mat.  That is a problem in that I live in Chicago in an apartment that is already bursting out of its seams so I’m not sure how I’ll pull it off when that time finally comes.  Regardless, I’m painting some minis I will need and starting to make mental plans for those scenarios.  I think and hope it is going to be really fun and I hope many of you will stick with me for that voyage!

16 thoughts on “The Eriador Project Continues”