Another eventful week for me and I have something I’m excited to show off so I won’t waste any time.  While I thought I’d have tons of terrain to share, I’m not quite done with another batch of trees so those will make an appearance next week.  I had a terrain setback when I had a hedge probably 75% done and the plasticard started warping.  I decided to trash it and donate what plasticard I had left to the school where my fiancee works.  Instead, I have more MDF coming from Charlie Foxtrot Models who make excellent products.  I had just ponied up money for some of his MDF crop fields as I didn’t want to make more farmland that would warp.  I look forward to working on that and getting some hedges made in the near future. 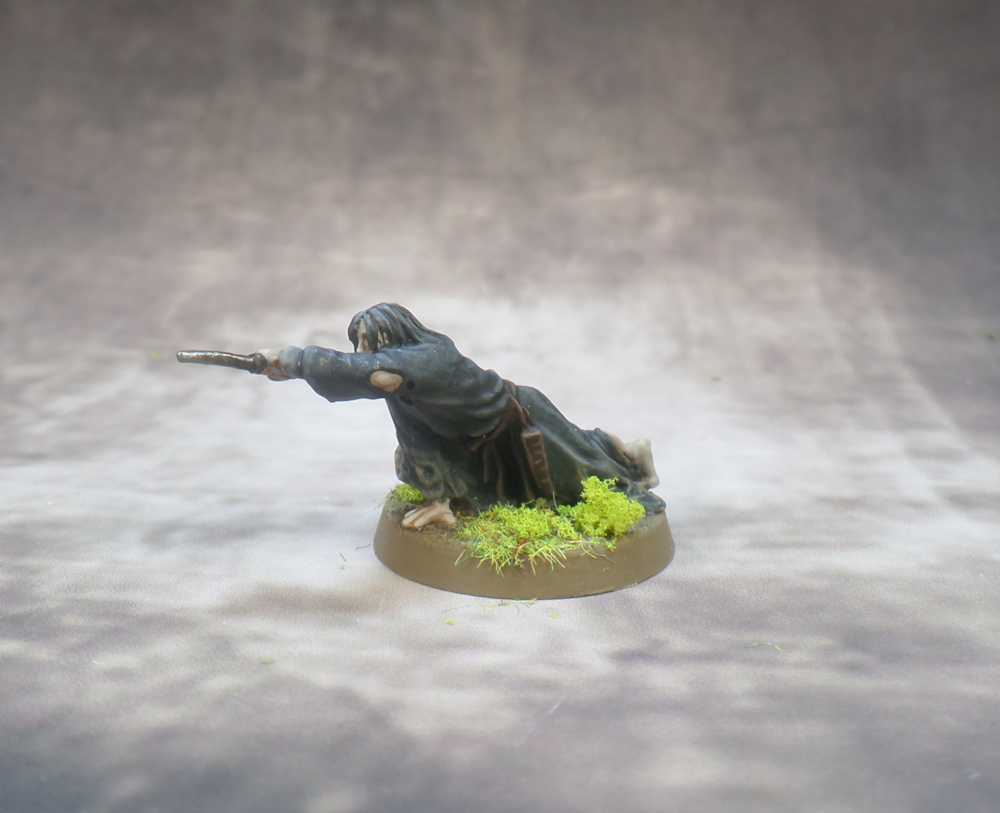 In term of what I have finished, I varnished and based Wormtongue.  He doesn’t look quite as cool based as I thought he would.  I think the limited real estate left on his base is the main reason why.  I started getting his “buddy” Sharkey prepared for painting and while I got a pretty bad cast, I do look forward to pairing the two together for some scenic images in the future.  Speaking of scenic, I finished another mini this week… 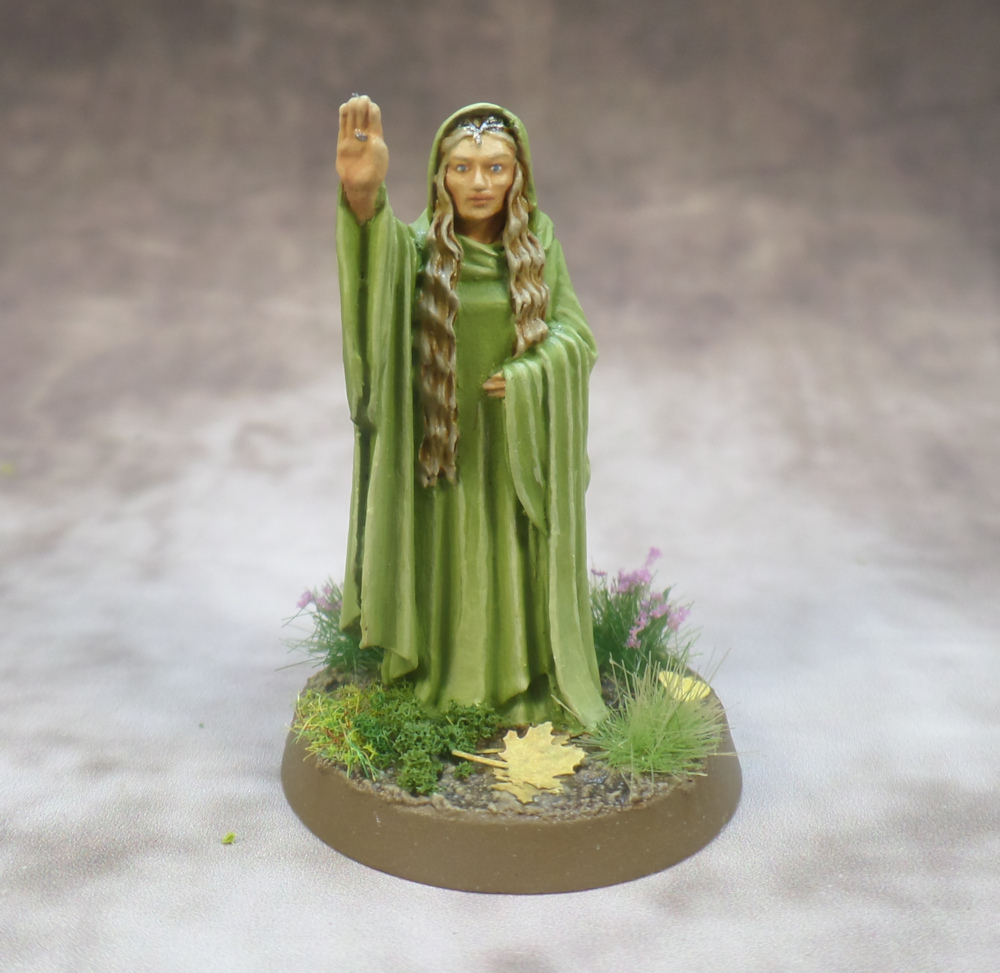 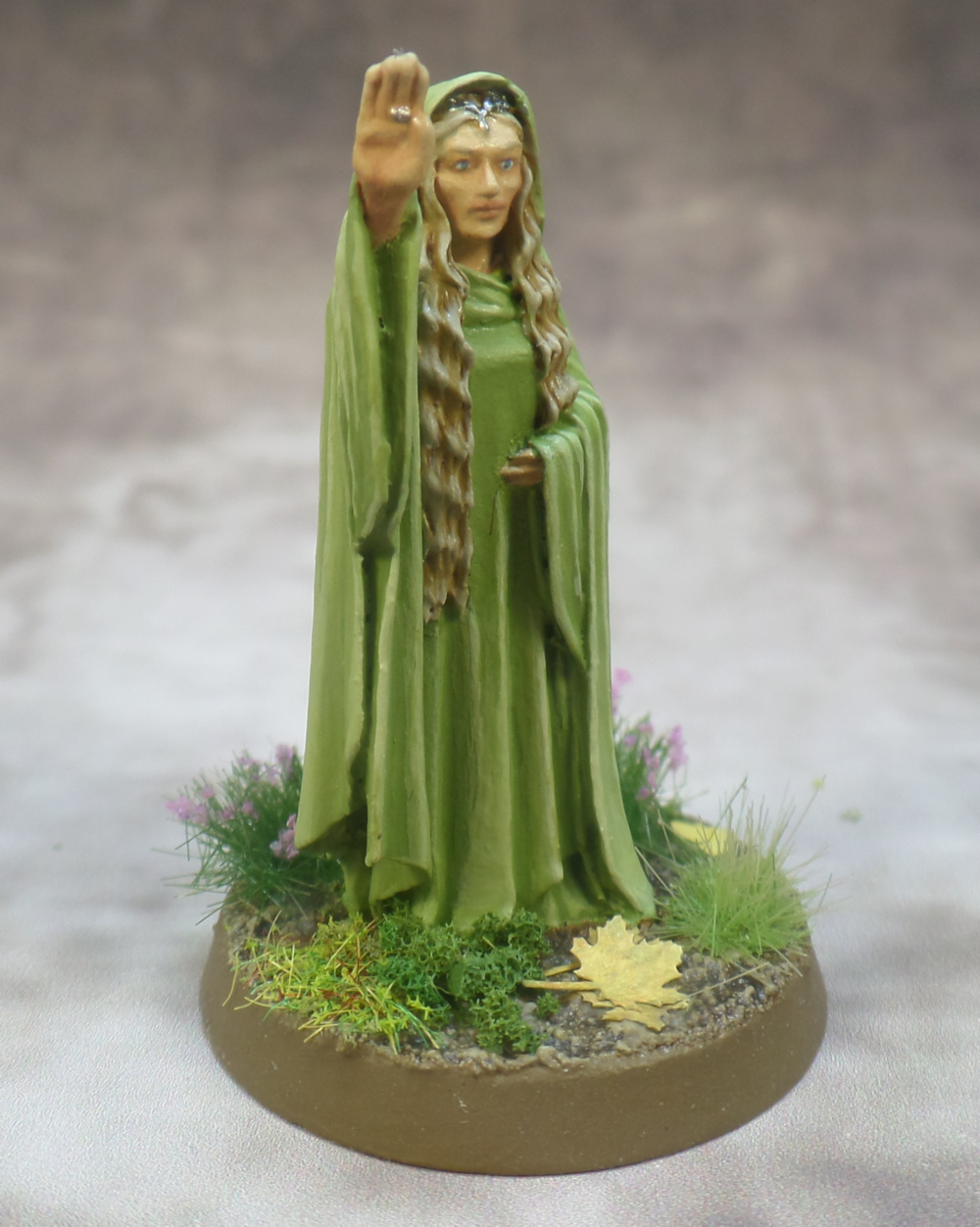 Months or maybe even a year ago, I bought a set of Galadriel, Celeborn, and the mirror off eBay and they sat around because I wanted to make sure I could do a great job on the minis.  For whatever reason, I suddenly got the desire to paint Galadriel so I did!  I had a great time painting her and while she isn’t perfect, I think she is painted at an extremely high level and I’m really pleased with the results.  This mini was very popular in Golden Demon when she was newer and I can see why.  Her eyes were so well-sculpted that I nailed them on the first attempt.  She has fairly good definition in her robes so it isn’t too hard to layer them and really make them pop.  While I wouldn’t enter this in the Golden Demon, it felt good to paint something like this at a high level without running into too many issues.  I have big plans for Galadriel too.  I’m not sure she will see much use in gaming but I have an idea for a little display with her husband and some other elves that I will slowly piece together in the coming months.  Stay tuned for more updates!

I’d like to close this week with a couple of somewhat random thoughts.  I’ve been pretty inspired by the hobby this week and am starting to think that Battle Companies is something I need to pick up in the near future if I want to get more games in but keep up my focus on narrative gaming on this site.  Especially as I expand my collection, I should have opportunities to tell some stories in that way. 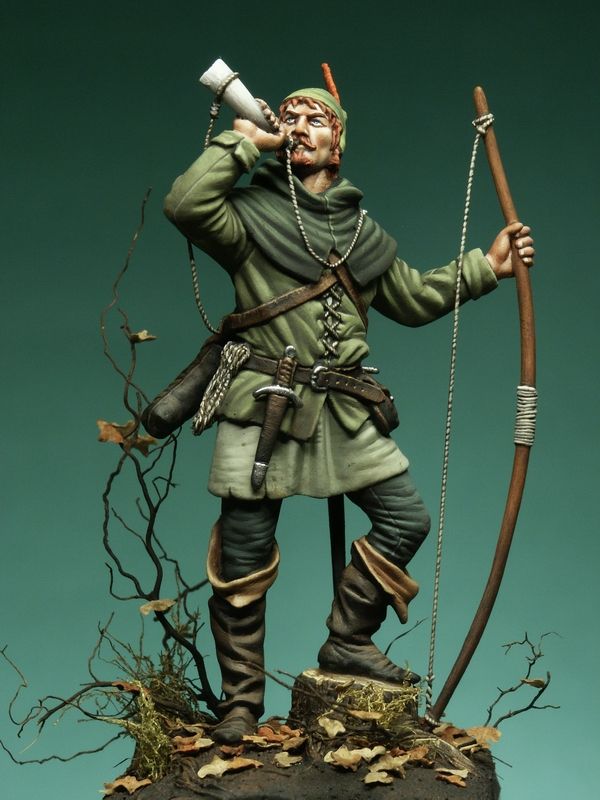 For whatever reason, I’ve been window shopping other miniatures games a lot as well and while SAGA is the current game that is catching my eye.  I realized that a game that I would really like to play is something about Robin Hood.  I’m shocked that there isn’t a game out there just focusing on that subject but there isn’t that I could find!  About 20 years ago (how did I get so old?), I played a PC game about Robin Hood that was a strategy game as best as I can remember and it really made an impression on me.  Fighting the corrupt sheriff and king was a lot of fun and seems perfect for wargaming.  Many historical and fantasy wargamers (including me!) would have the terrain needed for such a game too.  I would think a Robin Hood miniatures game would do quite well in the wargaming market but I guess I’ve finally found an interest of mine where there isn’t a game that is tempting me finally!

11 thoughts on “The Lady of the Golden Wood”